The Reserve Forces Review 2030 was conducted by a small team led by the former Minister for the Armed Forces, Brigadier The Rt Hon the Lord Lancaster of Kimbolton TD PC. The report followed 10 months of research and engagement and produced 18 recommendations on how Defence could build on earlier work achieved under the £1.85bn Future Reserves 2020 programme. 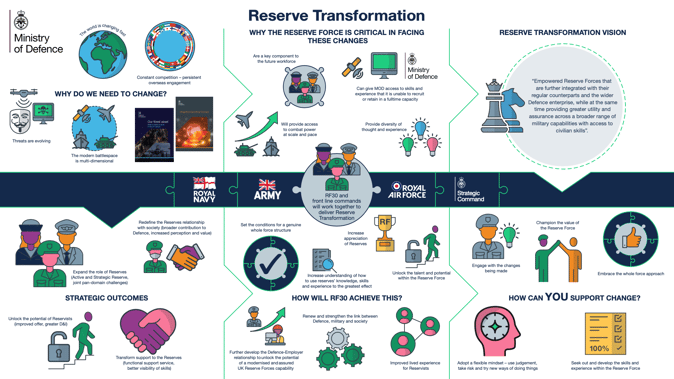 Reserve Forces 2030 (RF30) is a capability driven programme that has created 14 workstreams from the RF30 Review's recommendations. It is designed to help inform wider work to establish the UK’s future defence and security requirements, taking account of the increasing need to meet emerging risks and threats. It sits alongside the Integrated Review and the Integrated Operating Concept 2025.

The RF30 programme maintains its focus in four key areas:

1.Re-defining the Reserves’ relationship with society, recognising the need to cooperate and share expertise with, for instance, industry and academia.

2. Expanding the role of the Reserves as part of an integrated joint force, helping deliver active’ tasks - such as homeland resilience and defence diplomacy - whilst preserving and enhancing their assured capability to meet ‘contingent’ tasks such as war fighting.

3. Ways to unlock the full potential of the Reserve component of the UK’s armed forces, such as simplifying commitment types and better utilising the civilian skills, experience and diversity that Reservists can provide as part of the Whole Force.

4. Transforming how the Reserves are supported to deliver their mission, recognising the unique needs of the force and with a strong emphasis on digital enablement.

Join this, the second in a series of RF30 webinars, to receive an update on the RF30 priority workstreams. As requested during the first webinar, this webinar will focus on:

Defence lead for coherence and implementation of RF30 Review recommendations. 36 years’ service in the Reserve Forces (Royal Signals) including overseas deployment to Iraq, and civilian specialist in IT.

Civil servant for 28 years, in both operational, business change and project management roles.  People Transformation in MOD for 4 years. RAF Police Reservist for the last 7 years.

Reserve Forces member since 1982. Original member of RF30 Report team. Previous OF5 roles in combat and initial training policy, and a deployment with NATO Mission Iraq.

Joined the Civil Service in Aug 22 after a career in the British Army.

Previous position was in the Reserve Forces and Cadets Directorate in the Ministry of Defence, responsible for mobilisation policy.

Joined the RF30 team in September 22 as the lead for the Readiness, Mobilisation and De-mobilisation workstream.

Lead for the Culture and Communications Workstream.

Joined Defence in 2004 and has worked across the majority of TLBs and Commands.

Previous role was in Acquisition and Approvals Transformation as Communication Team Leader.

Lead for the Estates and Trg and Skills RF30 workstreams.

PT Officer by background with significant command and staff experience; has worked extensively in RAF and tri-svce trg roles.

This webinar is for all those within the UK Armed Forces who wish to find out more about RF30. All ranks are welcome.