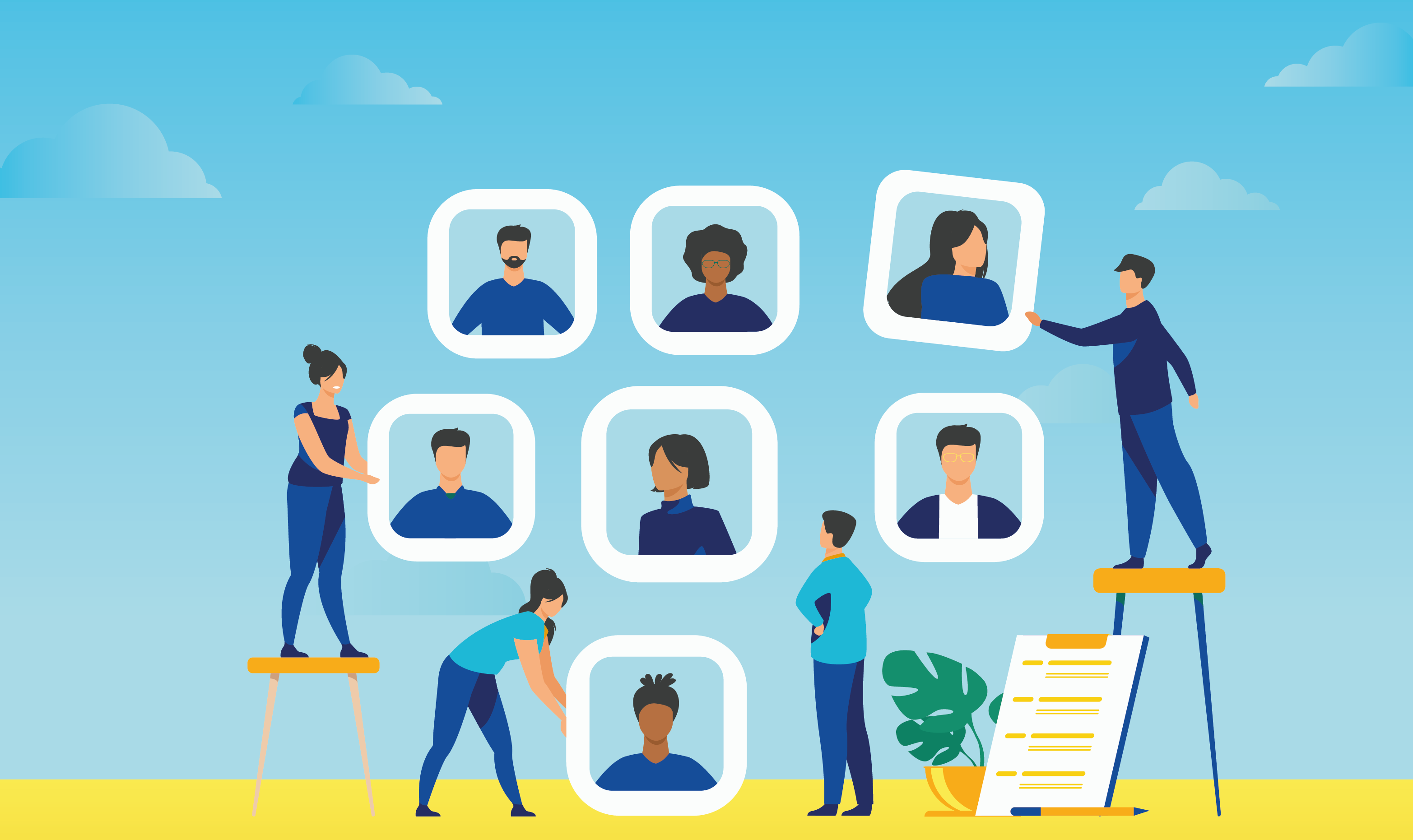 Ann Roberts, Chief People Officer at Flo Health and ex-HR Director of Bumble, shares her lessons on how to effectively scale talent and culture in fast-growing tech businesses.

1. DON’T GROW FOR THE SAKE OF GROWING.
"Hiring like crazy" is not a sign of success - revenue, growth and profitability are. Every time you decide to hire more people, you have to go to the labour market and ask for help, because you’re not able to deliver by yourself. Resource constraints force you to be creative and make do with what you have: scrutinise every vacancy and prioritise which ones you really need. In time these constraints also reveal what the real business priorities are, and you hire when and where it really hurts - this is where the greatest impact will be had.

2. EVERYBODY HAS TO BE WORKING.
When start-ups become scale-ups, they often end up with a considerable number of ‘passengers’ and unnecessary roles. You will end up needing more people to solve the problems that emerge from hiring too many people in the first place. Communication, speed and decision-making suffer as coordination latency kicks in, as lots of well-meaning, capable people keep each other busy instead of solving user problems.

3. MASTER THE MUNDANE.
Scalability is the most important leading indicator of healthy growth. Build scalable solutions from the outset. Don’t bake in permanence with ‘good-enough-for-now’ platforms that become operational tech debt before you’ve even gotten them up and running. The market is full of affordable and scalable SaaS solutions that can grow with you. Nail the basics upfront – good enough today will not be good enough tomorrow, and tomorrow comes always faster than you think. You don’t want to start cleaning up your sloppy processes and systems, or tendering new vendors in the middle of your growth spurt when you need all hands on deck.

4. BEING SLOPPY AND CHAOTIC ISN’T A BADGE OF HONOUR.
Chaos is not cool; it is confusing and can sap growth. Chaos means people don’t know what they’re meant to be doing, who is doing what, and how things are done. I discount any interviewee who “thrives in chaos” - either they haven’t experienced how sh*t real chaos feels like, or don’t know how to build scalable solutions and intelligent shortcuts to bring order to that chaos. Everybody likes to fail fast nowadays; it’s better not to fail at all. The idea of ‘learning from failure’ has become an excuse for acting complacently, taking sloppy decisions, missing opportunities, and failing to analyse the costs and benefits of your options.

5. PRIORITISE AND EXECUTE.
Don’t take on too many problems at once. Sometimes an explicit decision not to decide is the best way forward. We spent seven months delaying a major restructure of a business that would set us up better for business delivery, stuck on agreeing a new group name for the announcement. We learnt the lesson to put first things first, by importance and not by urgency. The more you have decisions that pile up, the more complicated it becomes to untangle the interconnected mess of options and resulting analysis paralysis.

6. AGGREGATE MARGINAL GAINS.
As Sir Dave Brailsford and Team GB have proved over and over – gaining an edge over your competition rarely comes from a lightbulb moment, a big breakthrough, or a stroke of luck. More often it’s the result of spotting connections between user problems, delivered through tiny marginal gains from cross-disciplinary mashups. If you can make one good decision every day, the positive impact snowballs over time. For this you need to have lots of T-shaped talent - people with deep domain expertise coupled with broad generalist problem-solving skills. Most tech jobs are just clusters of creative problem solving needs. Product teams that can respond and flex quickly and efficiently generate the compound interest of effort, which accrues over time to become an inimitable advantage.

7. KEEP THE TALENT BAR HIGH.
“We are happy to drop the talent density of the early days”-  said no Founder or CEO ever. Nobody thinks they’re average, and nobody wants to be mediocre. But it happens almost invariably. The reason: ‘keeping the bar high’ sounds great as a slogan, but sustaining empty vacancies as you hold out for the best hurts, it really hurts. Your release dates are slipping without that engineering capacity, your UX team is floundering without that VP to bring them together, user problems remain unsolved in a holding pattern, people are leaving from pressure on capacity. If you don’t want to end up in productive mediocrity, everybody needs to know the talent strategy to be able to take the short-term pain for the long-term gain.

You can teach the garden to weed itself like Zappos’ famous leaving bonuses, or something that has served me well over and over: radically candid interview process where most of the time is spent on talking a candidate out of the role, not into the role. If they’re still in after all the skeletons are out, they’re in-in. When some of the most admired companies in the world reflect on their early mistakes, they say it isn’t that they didn’t hire fast enough, it’s that they didn’t fire fast enough. It’s what economists call an effective separating equilibrium.

8. CULTIVATE CONFLICT.
Some people are naturally disagreeable. They may have a bad user interface but a great operating system. Don’t aspire to create a culture where everybody is so considerate that they shy away from expressing dissenting opinions. People think harder when they fear their views may be challenged. We should be seeking out people who think differently. They may bring new ideas and novel angles to the table. Even if they don't, they'll certainly bring out the best in us, if only by making us feel awkward and forcing us to refine our arguments. If you have established ground rules and are mindful to separate the people from the problem, there’s nothing as productive as a bunch of passionate people having a good argument.

9. BACK TO BASICS.
As you scale your operations, remember to make sure everybody understands the fundamental growth drivers of the business, and make them as transparent as you can. Don’t assume anything, and take everybody back to basics every once in a while. I can’t put it any better than the iconic NFL football coach Vince Lombardi: “Gentlemen, this is a football.”

10. TELL YOUR STORY. THEN TELL IT AGAIN.
People don’t join you as a person – they don’t even know you. They join ‘a company’, a nebulous conceptual term for a collection of individuals building stuff together. So, they join the story you tell, and the future you paint. As Yuval Noah Harari said, all large-scale human cooperation is ultimately based on our belief in imagined orders. Make sure to put conscious effort into capturing the history, the stories and anecdotes of your venture. Tell them over and over again to your newbies. The stories of the humble beginnings, the ‘early days’, is a far more powerful glue than a corporate slogan on your website. You don’t even need a garage for your founding myth; keep it authentic with all of the banalities of the daily grind. As renowned strategist Tyrion Lannister once said: “What unites people? Armies? Gold? Flags? - Stories. There’s nothing more powerful in the world than a good story. Nothing can stop it, no enemies can defeat it.”

Read more about leadership and culture in our State of Recovery Report, which you can download here.

This article was originally published in Chief Disruptor magazine, Issue No. 6.

Ann is building rocketship companies in the high-growth tech space. She is the Chief People Officer of Flo, the #1 most downloaded Health app on a mission to improve the health and wellbeing of every girl and woman worldwide. Before Flo, Ann was the Group HR Director at Bumble, with previous gigs in Goldman Sachs and Rolls-Royce. She is interested in all things at the intersection of modern human capital practices, emerging tech, brands that are dripping with purpose, and business results. Ann was the Stonex Scholar at London School of Economics, has an MBA from Imperial College, is a judge at the UK Employee Experience Awards and was the HR Professional of the Year Gold Award Winner in 2019.